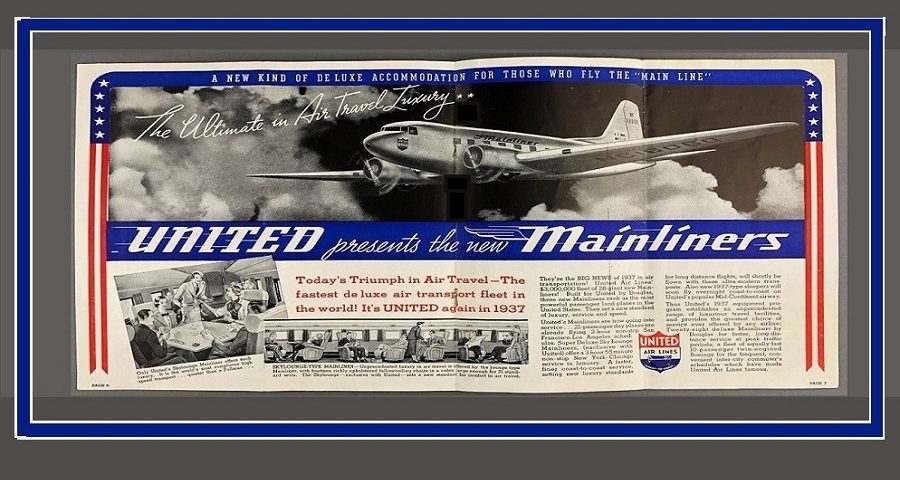 On an early evening in late 1938, a gleaming American Airlines DC-3 departed Newark Airport, bound for Glendale, California. The takeoff, wrote a Fortune magazine reporter aboard to record the still-novel experience of cross-country air travel, was effortless. “Halfway along the runway,” he recounted, “she left the ground so smoothly that none of the first fliers in the cabin realized what had happened until they saw the whole field rushing away behind them and the factory lights winking through the Jersey murk ahead.”

By the time the flight crossed over Virginia, passengers had already polished off a dinner of soup, lamb chops, vegetables, salad, ice cream and coffee. After a refueling stop in Nashville, the DC-3 continued west. Beyond Dallas, the journalist added, “visibility was limited only by the far horizons of the curving earth.” Despite head winds, the plane arrived on schedule at 8:50 a.m. Total time was 18 hours 40 minutes, including several ground stops.

In 1934, the year before the introduction of the DC-3, a flight from New York to Los Angeles was a grueling ordeal, typically requiring 25 hours, more than one airline, at least two changes of planes and as many as 15 stops or so. Now, a single plane could cross the country, usually stopping only three times to refuel.

Today, a legendary DC-3 hangs suspended in the Smithsonian National Air and Space Museum. The plane, says F. Robert van der Linden, the museum’s curator of aeronautics, “is widely considered to be the first airliner capable of making money just by carrying passengers.”

But the plane’s primary—and romantic—accomplishment, says Henry M. Holden, author of The Legacy of the DC-3, is that it captured America’s imagination. The journey became the destination. And with good reason: Passengers aboard the plane entered a cosseted world inconceivable to today’s beleaguered air traveler. “Once airborne,” Holden says, “passengers were offered cocktails, followed by entrée choices such as sirloin steak or Long Island duckling, served on Syracuse China with Reed & Barton silverware. At cruising altitude, the captain on occasion would have strolled the aisle and chatted with passengers, who were called ‘visitors’ or ‘guests.’” Recall, too, Holden adds, that “transcontinental sleeper flights featured curtained berths with goose-down comforters and feather mattresses. Breakfast choices might have been pancakes with blueberry syrup and julienne-of-ham omelets.”

In that heady pre-World War II era when the nation began dreaming of air travel, the runaway appeal of the DC-3, whether fitted with berths or only with seats (like the museums’ plane), convinced Americans to take to the skies in record numbers. In 1940, more than two million Americans made trips by air; cost per mile for the consumer decreased from 5.7 cents in 1935 to .05 cents. (Round-trip, coast-to-coast flights were a pricey $300, the equivalent of $4,918 today, but business customers in particular flocked to take advantage of the time saving.)

No less iconic a figure than Orville Wright became a booster. In the late 1930s, when TWA opened a route to Dayton, Ohio, the 65-year-old Wright was on hand to witness the arrival of the DC-3 at his hometown airport. “They tell me that [the plane] is so sound-proof that the passengers can talk to each other without shouting,” Wright told reporter Douglas Ingells that day. “This is a wonderful improvement. Noise is something that we always knew would have to be eliminated in order to get people to fly. Somehow it is associated with fear.” Wright had only praise for the plane bringing flight to the masses. “They’ve built everything possible into this machine,” he said, “to make it a safe and stable vehicle of the air.”

Wright, however, declined an offer to be taken up for a spin in the DC-3 that day. He didn’t give a reason. Perhaps he simply thought that the plane belonged to the next generation of pilots. Those fliers, of course, would soon take the DC-3 to war as the C-47, modified for cargo and troop transport. On D-Day, paratroopers dropped behind enemy lines were ferried to France aboard the C-47.

Certainly, everyone who flew the DC-3—which would stop production in 1945 as the next generation of passenger planes came on line—was devoted to the plane for its reliability, even in icing conditions or turbulence. (Today, at least 400 DC-3s are still flying, mainly on cargo runs, all around the world.) “The sheer strength of the DC-3 is what sets it apart,” says Holden. “And it is a forgiving plane, incredibly forgiving of pilot error. At times, you could almost say, she flew herself.”

Also read here about our very same Mr. Douglas (N129H) aircraft that is a feature in the book and is pictured here in all it’s glory; once owned by Conrad Hilton and Barron Hilton (Hoteliers) and Donald Douglas the (Inventor) himself.  It was coined “THE FLYING SOPHISTICATE”.

The N129H fixed-wing, propeller-driven Douglas DC-3 airliner revolutionized air transport in the 1930s and 1940s. Its lasting effect on the airline industry and World War II makes it one of the most significant transport aircraft ever made. It has a cruise speed of 207 mph and range of 1,500 miles. Before WWII, the DC-3 pioneered many air travel routes. It was able to cross the continental United States, making transcontinental flights and worldwide flights possible. It is considered by aviation experts as the first airliner that made a profit by carrying passengers alone.  Civil DC-3 production ended in 1942 with 607 aircraft being produced, according to aviation sources. However, together with its military derivative, the C-47 Skytrain (designated the Dakota in RAF Service), and with Russian- and Japanese-built versions, more than 16,000 were built.

In the early ’60s, when I went wrong and started hanging out at the aerodrome, common wisdom was that the DC-3, while a grand old airplane, had outlived its usefulness to the military, the airlines and even corporate operators. Its death knell was tolling to signal the time had come to relegate these antiques to the boneyard. Fortunately, before last rites were administered, a slew of “Gooney Birds” escaped from old-airplane homes and, in some configuration or another, are alive and well today.

So what can I possibly add to the millions of print words, websites, fan clubs and semi-religious cults dedicated to every detail of the airplane’s design, iconic history and idiosyncrasies? When he gets a type rating, every DC-3 driver assumes he’s now an expert and, given the slightest chance, will pontificate on incredibly obscure details of its plumbing, wiring, engine operation and reproductive system. He will, of course, also tell you how to fly one. But I kind of respect that; a hopeful who doesn’t know the “right stuff,” the stories — like how to start one with an inoperable fuel pump (straddle the cowling and pour a can of avgas in the intake as the engine’s cranking), how to eyeball the tailwheel strut to see if someone has loaded 8,000 pounds instead of 6,000, or what the F-bolt is — probably won’t pass the check ride.